Barr, (pronounced “bear”) is on the other end of the phone with his father, Barry Wigglesworth, whose eyes crinkle at the corners as he chats with his son.

“The kid,” as Barr’s father often calls him, turns 48 next month. This birthday, like each one before, is more special than the last.

“The doctors said there was something wrong at birth,” Barry recalls.

In 1968, Barry’s only son was diagnosed with Ebstein anomaly in its severest form, a rare heart defect that is present at birth where the heart valve doesn’t properly close to keep the blood flowing in the right direction. Blood may leak back from the lower to upper chambers on the right side of the heart. Barr’s condition proved to be the rarest-of-rare: there were only a handful of cases nationally like his at the time.

At 6 months old, after his first catheterization, he was referred to UF Health and placed in the care of Benjamin Victorica, M.D. Because of complications from his condition, Barr’s medical team managed his care, hoping to delay surgical intervention as long as possible. The goal: allow him to stabilize before undergoing the demanding and complicated surgery.

For the next 10 years, Barr tried to live a normal life, but of course it was anything but. In the meantime, physicians at UF Health were sending his medical records around to many other institutions to evaluate whether he could be a candidate for reconstructive heart surgery. Many times, they received the same answer: No, it was too risky.

Finally, it was here at the UF Health Congenital Heart Center where Barry and his family found their “Miracle Man,” in James A. Alexander, M.D., a thoracic surgeon specializing in congenital heart defect repair.

In 1983, Alexander, along with a team of other physicians, including Daniel Knauf, M.D., agreed to take on Barr’s case. Without the surgery, Barr would surely not survive.

Hours would pass after Barr’s surgery, and nurses or others from Alexander’s staff would check in every thirty minutes to update Barr’s father on his recovery. Alexander was often found at Barr’s bedside, spending 24 hours at a time with him.

“I remember at one critical point, we really weren’t sure how this would turn out,” Barr’s father said. “And Dr. Alexander walked in and said, ‘I don’t know how he’s here, but every minute he is, he is a minute better.’”

At this turning point, Barr steadily improved. After a little more than a month in the hospital, he was discharged home to his new normal. Years later, Barr required additional surgery and care; working with James A. Quintessenza, M.D. — who trained under Alexander in residency and fellowship. Now, Barr works full time as president of his family’s furniture store in Sarasota. He spends time traveling to other countries and visits the gym (and rock concerts!) on a regular basis.

Ever since that initial surgery more than 30 years ago, Barr’s father has remained a loyal philanthropic supporter of UF Health because the doctors and clinical care teams believed they could help his son and were willing to do everything in their power to do so. The reason he gives is clear.

“I feel I’m paying back a debt that’s owed. Giving, for me, comes from a very personal place,” he said.

His passion for philanthropy is evident. He’s being honored as a Hall of Fame inductee by his former employer, Florida Power and Light, at a ceremony later this summer. He also was recognized as a 2015 “Food Bank Hero” by the Sarasota Food Bank, a program that focuses on child hunger, for spending hours on a weekly basis helping to fill weekend backpacks with food for children and families.

“I have a sensitive spot for kids because we had a tough time,” he said. “There are other kids, other families who have a tough time, not only with the financials of a complex medical issue, but with the support, too.” 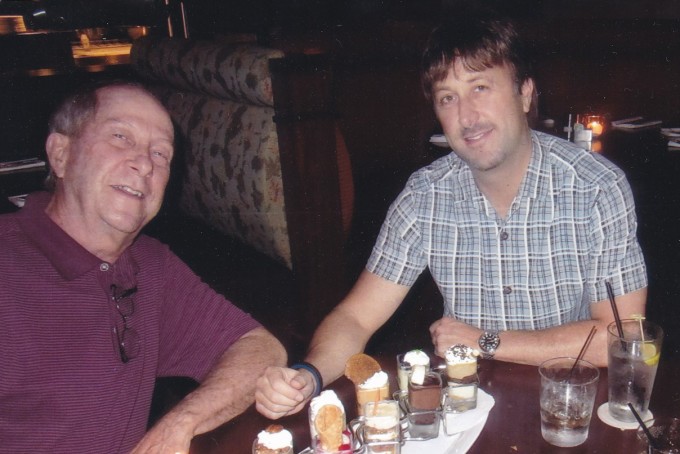 For him, he’s happy that his son lives a few doors down from his own home. He’s thankful that after several surgeries and continued care, his son lives a normal life. And while he continues supporting other kids and families through annual giving with UF Health, he’s more interested in how he’s impacted those closest to him.

“After my experiences, I recognize that parents with sick kids have tough times, and they stick it out. And I want others to recognize that too,” he said.

“Ultimately, though, I want to be known for being a good parent, a good dad.”

More from the Annual Giving eNewsletter:

Teresa Zamor is experiencing a lot of firsts as a physician assistant student at the UF College of Medicine.

Employees define the future of health care, together

Through the annual “Raising Hope at Work” employee giving campaign, UF Health Shands and UF College of Medicine faculty and employees have joined together since 2009 to raise money for the biggest needs of our organization.

When he was 38 years old, Doug Kirk remembers how things like brushing his teeth or raising his left arm became difficult. He wasn’t able to sleep. Even sitting for extended periods of time proved painful. But this summer, he and his wife Sheila will cycle for more than 450 miles along the scenic southern hills of Iowa.