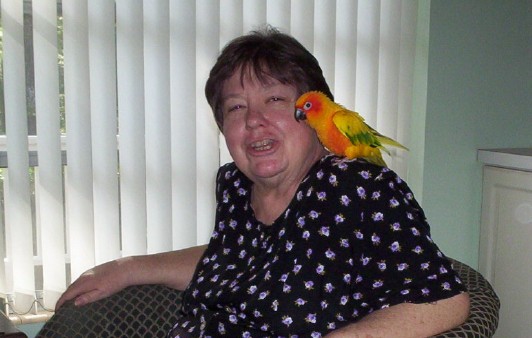 Growing up in a family of physicians, Joan Anderson never quite became acquainted with the nursing side of health care.

But that all changed in 2011 when she witnessed her sister Judith in the care of nurses at UF Health Shands Hospital.

“They sort of wove the word hospitality into hospital,” Anderson said of the nurses working in the 8 East Medical Oncology unit where her sister received chemotherapy.

Over the course of Judith’s treatment, Anderson developed a deep respect for the role nurses played in her sister’s care. She appreciated the competence and compassion they showed and how they worked to make her feel comfortable and welcomed.

She acted as Judith’s full-time caregiver at home, so while she found it difficult to leave her younger sister’s side during inpatient therapy, it granted her a much-needed reprieve and gave Judith the chance to interact with different faces.

Although Anderson appreciated all the hospital staff who interacted with her sister, she extended her thanks through a donation to the Gift of Gratitude program in honor of two nurses, Carmen Harris and Eyron Bush, who spent a great deal of time with Judith and skillfully helped to relieve her immediate symptoms.

Judith, from Fort Wayne, Ind., was a deaconess who worked with people with developmental disabilities. She was diagnosed with late-stage leiomyosarcoma — a rare tumor of the smooth muscle cells —and moved into her sister’s home in Gainesville to seek treatment. After a two-year battle, the 61-year-old succumbed to the cancer in February.

“The care [Judith] received… was so exceptional that it made a difficult time more bearable,” Anderson said. “I feel like she did have a better quality of life and in fact lived longer than we had reason to expect, even though it seemed too short for us.”

Bush, one of the nurses honored by Anderson’s gift, remembered Judith as more than just a patient.

“She was our friend,” Bush said. “We talked about our families; we really talked about all the things important to us. We tried to accommodate the things she liked. We liked to make her happy.”

Bush said she thinks making patients feel like they are among friends when they visit the hospital helps them feel supported and takes pressure off of families. For her, caring for patients is all about the details.

“The thing that matters most is that you take time to know them; that you remember they like hot tea only with one Splenda,” she said. “It’s the little things.”

But in spending time with patients, Bush believes the caregivers reap just as much as they sow by getting the chance to interact with people from all walks of life — like Judith.

“We meet the most incredible people in caring for them,” she said, “so they leave us part of themselves.”